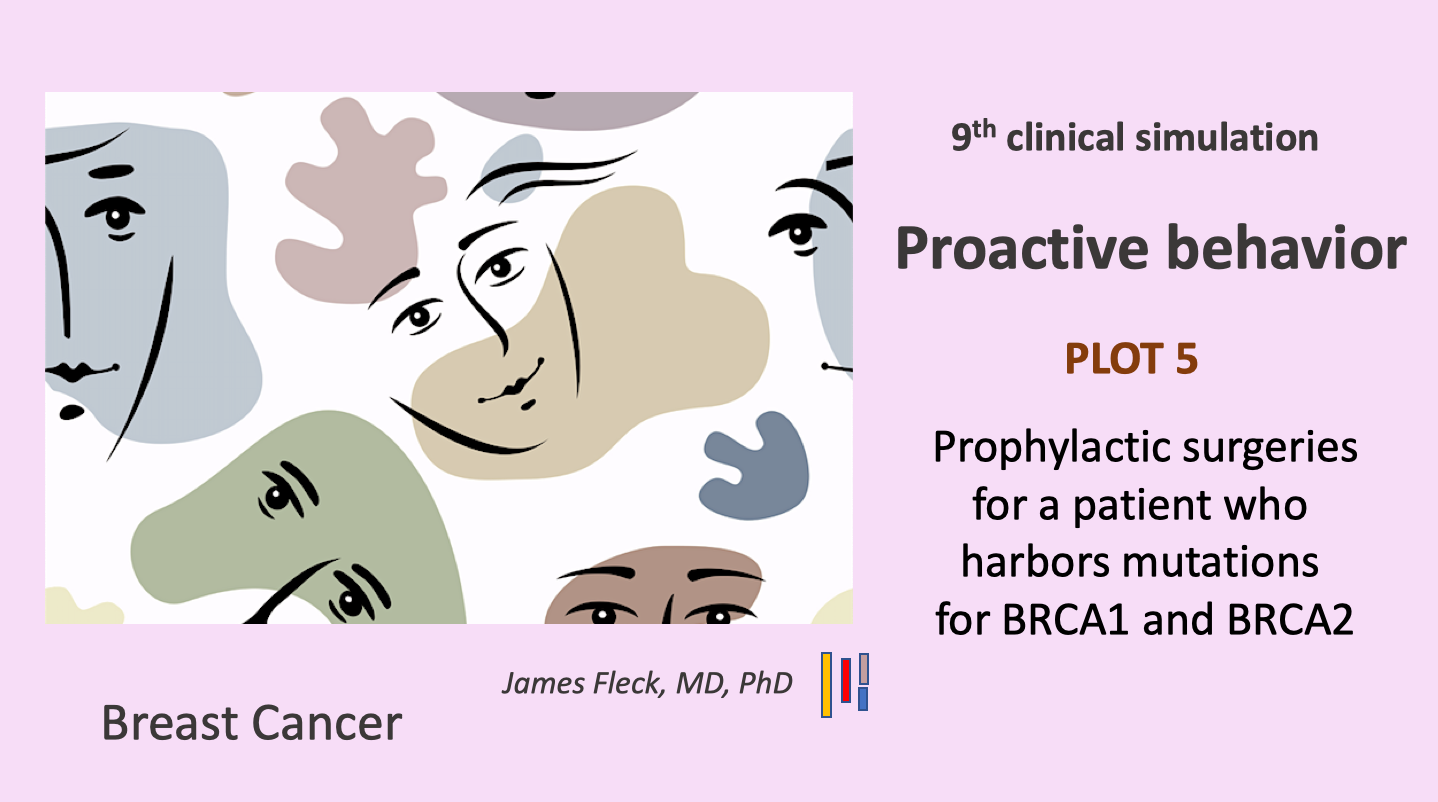 How to reconcile the curative approach of current triple negative breast cancer with the recommendation of additional prophylactic surgeries in a patient with BRCA1 and BRCA2 mutations.

Upon completing the chemotherapy program, Lyla was doing well. She managed to reach 90% of the programmed dose intensity. This is a calculation that involved not only the dose actually administered, but also adherence to the predicted cycle time. The 10% loss was caused by delays due to hospital admissions. However, this dose intensity was considered adequate and safe. Lyla was coping well with the hair loss and self-image damage caused by the breast surgery. She admitted that everything would be transitory. Her hair would come back and she would have already planned a future breast repair plastic surgery. A month after finishing chemotherapy, Lyla was already emotionally preparing for the next challenge. In a routine clinical visit, she asked me about the consequences of positivity for BRCA1 and BRCA2 mutations.

I explained in detail the cumulative lifetime risks of developing additional breast cancer and/or ovarian cancer. The safest recommendation would be bilateral prophylactic mastectomy, combined with bilateral hysterosalpingo-oophorectomy. However, if this radical decision were to be delayed, she could be followed up temporarily with breast MRI and periodic gynecological examination including ultrasound.

Lyla argued that motherhood was already at an advanced stage of planning. The assisted reproduction group was successful in obtaining the eggs. They were well cryopreserved and sent for fertilization. This would have occurred in the laboratory through an intracytoplasmic sperm injection technique. Some embryos obtained and tested did not show mutations for the BRCA1 and BRCA2 genes. Two attempts to implant embryos into Therese's uterus failed, but the most recent attempt was successful and Therese was maintaining a healthy twin pregnancy for nearly 60 days.

I was impressed by the speed of decision making observed in Lyla and Therese. There was an unshakable desire for motherhood shared by the sisters. Everything had been arranged between them during Lyla's treatment. Both expressed great satisfaction with the acceptance of their ideas by the entire family. There was also a magical feeling brought on by the twin pregnancy. Supposedly, that would give two children to two mothers.

Lyla proposed waiting for the birth of the children to make decisions about the pending preventive surgeries. This raised a medical dilemma that I should discuss with Lyla. Since she had undergone breast-conserving surgery, there was a need to complement the treatment with adjuvant radiotherapy. Lyla's tumor was located in the left breast and, even with adequate technical protection, there would be some degree of cardiac irradiation. If Lyla accepted the prophylactic mastectomy, at that point, radiation therapy could be avoided.

Lyla, exercising her proactiveness, made a new proposal.

She would have a prophylactic mastectomy right away, but she would delay removing her ovaries and fallopian tubes until the children were born. She argued that while all was going well with Therese's pregnancy, we should be cautious. Lyla had little time to obtain eggs and did not have more cryopreserved ones. If the procedure failed, she would still have the ovaries to try again. I explained that chemotherapy-induced infertility was infrequent in young women like her, but that to further support her decision I would order laboratory tests to assess her hormonal status. Lyla agreed. Her laboratory tests, obtained a few days later, revealed functioning ovaries. I called Lyla and we made an appointment with the surgeon for the preventive removal of the breasts. Lyla would have breast implants placed during the same surgical time. My colleague was very experienced in breast cosmetic repair and Lyla was confident.

The surgery was uneventful. Two expanders were placed below the pectoral muscle, which would be progressively inflated postoperatively, respecting healing time and skin elasticity. Lyla was discharged in less than a week. All material was sent for laboratory examination. Pathological exam revealed no residual disease. The expansion process required several weeks until the volume and symmetry were reached, allowing the introduction of the definitive silicone prosthesis. Later, Lyla underwent a minor but aesthetically important intervention to get nipples done. The end result was gratifying. There was good symmetry, Lyla's skin had excellent elasticity, and the scars were becoming less visible. Lyla was pleased with the plastic result of the breast reconstruction surgery.

The children were born. They were two healthy girls.

Lyla waited six months before undergoing the removal of her ovaries and fallopian tubes.

Two years later, Lyla was doing well and regular follow-up was showing no signs of cancer recurrence. Unexpectedly, she came to my office to show the girls around and deliver a wedding invitation.

That sounded a little weird to me!  Although Lyla was always very outgoing and discussed all aspects of her health with me, I was not very involved with her assisted reproduction. I limited myself to dealing with the difficulties imposed by motherhood in scheduling her cancer treatment.

That afternoon, Lyla was especially happy as she walked into my office followed by the two daughters and her future husband. The girls were charming, intelligent and communicative like the mother. One had fair skin and blue eyes like Lyla's. The other had darker skin, dark hair and brown eyes that resembled the phenotype of Lyla's future husband. I was a little confused as I didn't know the details of that relationship. Lyla, once again being proactive, introduced me to her future husband, who was also the biological father of the girls. His name was Raul, a Peruvian urbanist architect.

* Attention: The story 9 has been published sequentially from PLOT 1 to PLOT 6 and you will always see the most recent posting. To read Story 9 from the beginning, just click in the numbered links located at the bottom of the homepage.