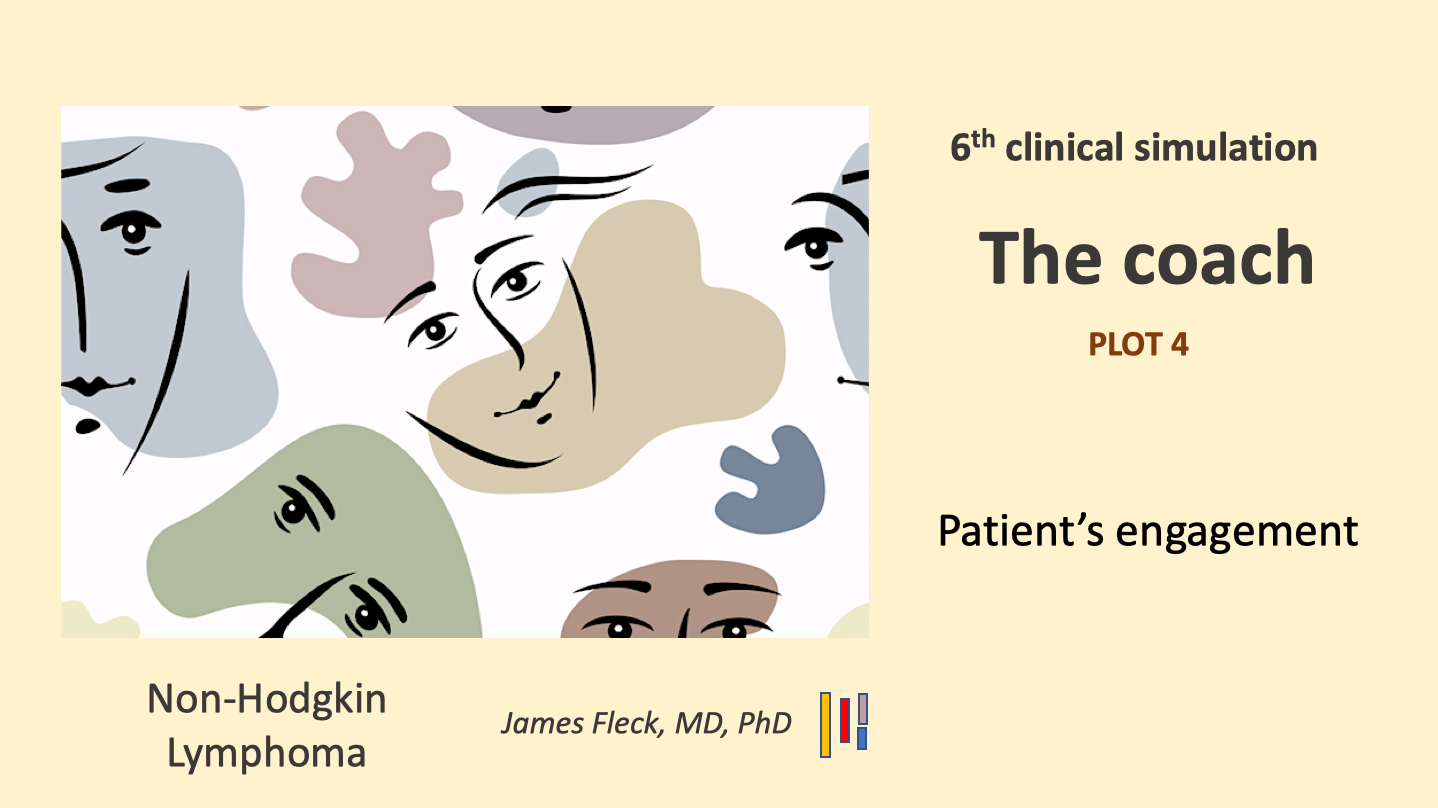 Next to the reception of the outpatient clinic, I improvised a room dedicated to the application of the electronic tutorial. It consisted of a small glass room, which could be watched and assisted by the doctor's secretary. Inside the room, the patient would sit in front of the computer screen performing the tutorial. Whenever need, he could ask the secretary to help him. The secretary would call the doctor to answer questions or even interrupt the tutorial if the patient felt uncomfortable.

When looking at the screen, made up of twelve icons, the patient could search for the information in the order he wanted, according to his curiosity or immediate needs. Most of the time, patients would choose a sequential order. That was Alex and Sue's choice, running the entire tutorial in one hour. Once started, the program always maintained the same content distribution. Each step had a main icon, an explanation of its importance, followed by the division into secondary topics. A repetitive methodology would facilitate patient compliance. You can browse the twelve icons in the tutorial by going to the link:

At the end of the tutorial, patients could make critical comments. It was a free space for the patient or family members to express their opinion. It was not an objective assessment, with quantification scales. We believed that, at least in its implementation phase, a spontaneous assessment would make a more valuable contribution.

Alex and Sue completed the tutorial and asked to call the doctor.

As soon as possible, I went to the outpatient clinic to meet them.Alex was a little apprehensive as he had taken two CT scans the day before, one for the chest and one for the abdomen. Next day he was going to have a PET-CT, followed by a bone marrow biopsy. He was now better understanding the purpose of these tests and their importance in guiding treatment. I had a previous conversation with Alex about the need and importance of these tests in assessing the extent of the disease (staging) and further planning of his treatment. The tutorial confirmed this information and made it clearer to Alex.

I reasoned for a moment! In previous consultations, the information was offered at the physician's discretion, while in the tutorial, Alex assumed an active search behavior, justifying his better understanding.

I talked with Alex, explaining my impression and he smiled saying: "You may be right, but what I want right now is to see the results of my exams".

I told him that we would have the results soon and that we would analyze them together, making the information more consistent and complementary.

She reassured him, saying that he shouldn't worry in advance.

Sue reminded Alex that in the tutorial there was a recommendation to go step by step.

In the feedback, Alex and Sue mentioned that the tutorial had broadened their horizons, but also generated some questions. In general, it was productive. Being better informed, the questions would be more appropriate and objective. They also believed that they could improve their performance by translating the information from the tutorial into the real life. This would happen as soon as they obtained the expected test results. Temporarily, they decided to go outside to enjoy the sunshine of that spring afternoon.

Alex used to be very objective in expressing his concerns, not exceeding his own emotional limits. His blood lactate dehydrogenase (LDH) level was high. In the tutorial text, this finding was referred to as an unfavorable prognostic factor. Alex was a clever man and, although he did not comment on the elevation of the marker, this was contributing to his high expectations about the results of staging exams.

I emphasized that he could contact me at any time. I also stressed that non-Hodgkin's lymphoma used to respond very well to the proposed interventions and that he would be treated with curative intent.

Alex needed to hear that word and put his hand on my shoulder, saying: “Well, this is the idea I want to keep. I'm leaving. Thanks for everything coach”.

Sue smiled whenever Alex called me that way and expressing her gratitude, she waved me goodbye.

A few days later, the couple returned to my office to hear about the test results.

I asked if they would like to see the images.

The three of us sat in front of a computer screen to look at the CT scans. They were cross-sectional radiological images of the chest and abdomen. I organized the tomographic sections from top to bottom, starting at the apex of the lung and ending at the pelvis. The lungs were clear, but a mediastinal mass caught my attention. The mediastinum is a region located between the two lungs, where the heart and the main blood vessels are found. The mass, measuring five centimeters in diameter was located at the anterior mediastinum. In addition, there were enlarged lymph nodes in the abdomen. The largest, measuring four centimeters, was located in the para-aortic region. The other organs of the chest and abdomen were normal. Browsing the images, I explained to the couple the meaning of those findings.

Sue interrupted me, questioning why those unusual image findings produced no symptoms. I told her, it could happen and it was usually a sign of a better prognosis. If the patient did not show symptoms such as fever, weight loss and sweating (B signs) he would have in a more favorable prognosis.

Alex asked if he would have to operate and I said no. Lymphoma is a systemic disease and should be treated only with medication and irradiation.

We move on to PET-CT.

It marked only the areas that have already been identified in the tomographies and, therefore, was consistent with the previous findings. The hypermetabolic areas were calculated using computer software and expressed in SUV (Standardized Uptake Value), which would be very useful for further evaluation, quantifying the response to treatment.

Alex asked if the PET-CT findings were good and I said yes. The main objective of PET-CT would be to rule out the presence of additional hypermetabolic areas not identified on previous tomographies.

Finally, we analyze the result of the bone marrow biopsy. It was a test performed with a special needle that had removed a bone marrow fragment from Alex's iliac bone. The marrow is located inside the bone and is responsible for the production of formed elements in the blood. I explained that lymphoma could infiltrate the bone marrow, but fortunately his test was normal.

Both sighed in relief.

Suddenly, Alex asked me about his chance for cure.

I explained that his stage was IIIA, as he had disease on both sides of the diaphragm (III) and had no symptoms (A). The pathological examination had revealed a diffuse large B-cell lymphoma. I explained that the unfavorable factors were a high LDH and the stage III, but that he had in his favor the fact that he was still young, had no comorbidities and was in a good performance status. Unfortunately, the absence of fresh tissue made it impossible to analyze the gene expression profile (GEP). However, the molecular classification was made available using LymphCx. This methodology generally shows 80% agreement with GEP and was used to reveal the cellular origin of Alex's lymphoma. It was a germinal center B cell lymphoma. Additional tests (immunohistochemistry and fluorescence in situ hybridization) were used to rule out a double-hit molecular profile (MYC translocation, BCL2 and BCL6 gene rearrangements). His phenotypic profile would anticipate a good response to R-CHOP, which means the combined use of chemotherapy (cyclophosphamide + doxorubicin + vincristine + prednisone) and rituximab (anti-CD20 monoclonal antibody). Alex's cure rate would be around 80%.

This behavior was expected, since an optimistic view is part of resilience and he clearly expressed it.

Alex thanked me for all the information and said that the tutorial helped him to better understand the disease and its implications.

I agreed, stating that he had definitely been the inspiration to produce the tutorial.

He took the opportunity to make some additional comments about the tutorial. Alex was a media professional. His social vision, together with his previous experience as an athlete, influenced him in the search for the tutorial. He said he understood all steps of medical reasoning. He also understood that medicine is multidisciplinary. Several professionals would give their opinion and the attending physician would gather all the information, translating it for the patient. He criticized the technical language a little, but understood that the subject was not simple.

Alex had never dealt with an illness before. He was not understanding the changes that occurred in his body when he was diagnosed with cancer. He also had no idea of ​​the technical terms used in medicine or how doctors used to think. When facing cancer, he realized that the human body is a universe of infinite variables. He compared cancer diagnosis and treatment with a space exploration. He commented that he now understood why doctors had placed so much importance on the biopsy of the tumor, since it allowed them to better recognize "the face of the disease". He added that, reading the tutorial, he understood that cancer is a common disease and realized that he was not alone. He felt confident because the doctors knew exactly how to diagnose, stage and treat his lymphoma. He felt safe because his treatment was not experimental and the decision-making was based on mature results provided by well conducted clinical trials.

Sue expressed her satisfaction when she realized that doctors were also trained to deal with emotional issues, which she considered essential to the success of the treatment. She also suggested that the tutorial should always be applied under medical supervision, as it raised questions that needed to be answered. She stressed that the tutorial did not replace the need for a "coach". It was just another tool for coping with cancer.

* Attention: The story 6 will be published sequentially from PLOT 1 to PLOT 6 and you will always see the most recent posting. To read Story 6 from the beginning, just click in the numbered links located at the bottom of the homepage.