How to manage a dysfunctional family 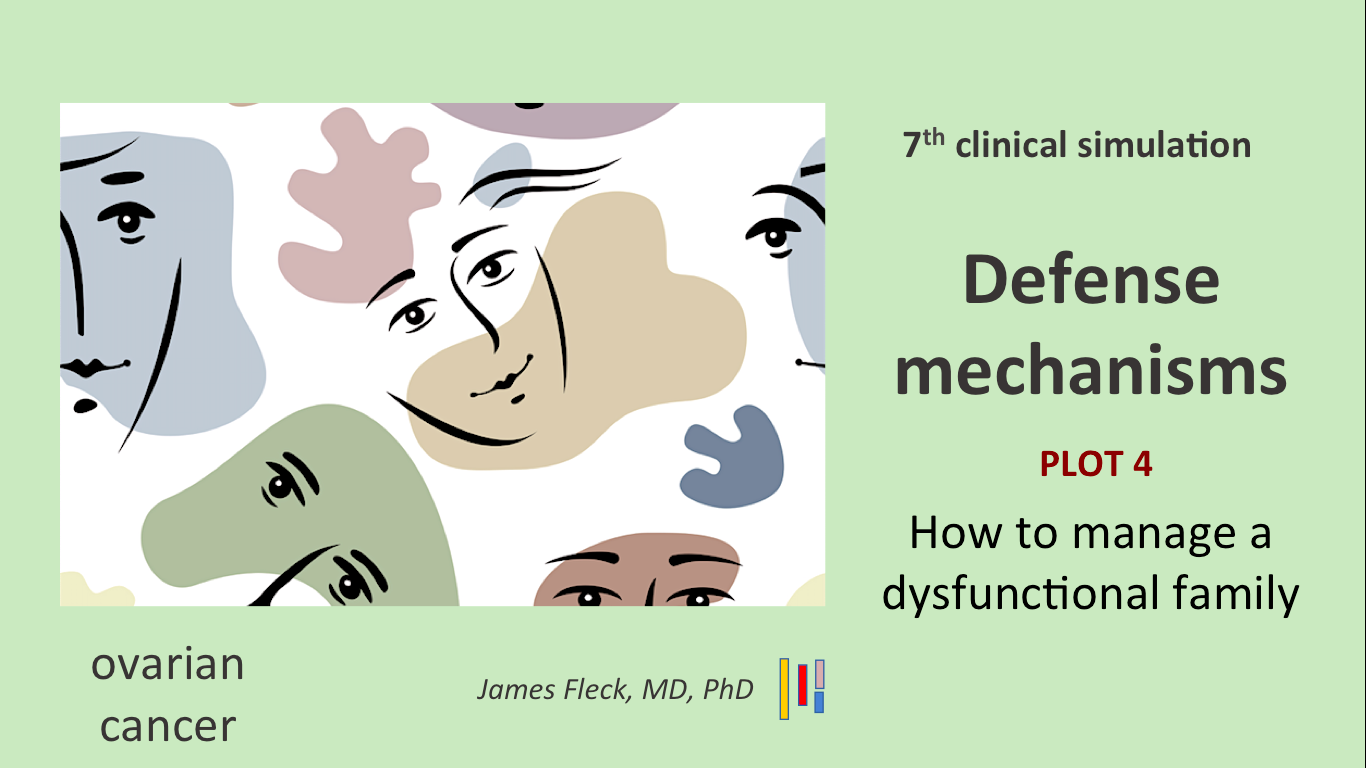 The next day, I received Clara's children.

Nothing has changed in their behavior. They remained in conflict, mutually ignoring the defense mechanisms. I mentioned my previous conversation with their mother, which had been very objective. She was informed of the results of the exams and a radical cancer surgery was recommended. Both reacted aggressively, as the mother had not shared any information with them.

This family was definitely not communicating clearly.

I described the findings of Clara's physical examination, my diagnostic impression and the referral for surgery. I explained that surgery was necessary, as it would allow for a histological diagnosis, assessment of the extent of the disease and an accurate recommendation for complementary treatment. It would be a major surgery, because in addition to the removal of the ovaries, tubes, uterus and omentum, several peritoneal biopsies and evaluation of the lymphatic drainage of the ovary would be necessary.

Ovarian cancer cells tend to implant in the peritoneum, which is called coelomic spread. Consistent surgical data have been published, favoring what is called optimal cytoreduction. The careful use of this technique leads to a residual postoperative disease, hopefully, less than 0.5 cm, which definitely improves the prognosis. Despite the clinical presentation suggestive of advanced disease, Clara would be treated with curative intent.

The children's faces lit up. I had the impression that they heard only the last sentence. They immediately assumed that the mother would be healed and that I would have made that commitment to them.

I had dealt with other similar situations in the past and knew that I would have no additional benefit in explaining the meaning of the word intention. I was aware that family's rational approach was not working. Even so, my intuition might not be entirely correct, but I would continue to try, with caution.

I decided to change the approach and talk about the overall cure rate for ovarian cancer. The numbers would depend on the transoperative findings and tumor histology, data that we would have after surgery.

There was not much change in the children's emotional scenario and I decided to continue exclusively with affective management. At least they had established a bond of trust with me and were not restricting my recommendations.

I reinforced the surgeon's qualifications and said that I would follow the entire procedure, closely. I would also take care of their mother throughout the hospital stay.

The surgery was uneventful. Clara had no comorbidities and had been previously classified as low surgical risk. There was a large pelvic tumor, measuring 15 cm in diameter, partially solid and mobile, originating in the right ovary. The omentum did not appear to be involved and there were no peritoneal implants. The pelvic and para-aortic lymph nodes were normal in size. Transoperative inspection of the abdominal cavity seemed normal, except for a small volume of ascites.

The surgeon removed the ovaries, tubes and uterus. Then he removed the omentum. Avoiding any vascular or intestinal injury, he progressively performed several abdominal and pelvic peritoneal biopsies. He collected ascitic fluid, sending it for cytological examination. He dissected the lymphatic drainage of the ovary and sent entire material for pathologic evaluation.

Fortunately, Clara had no residual disease.

I got a call from Clara's ex-husband. He lived in Paris and made himself available to meet the needs of the family. After reporting on the success of Clara's surgery, I asked him to increase his vigilance over their children and support them during this unique emotional distress.

Clara faced the postoperative without complications. She asked no questions, except how long she would be in the hospital. She showed a stoic behavior. She reported no pain and required minimal routine care. She followed through on all the recommendations, hoping to reach maximum speed in recovery time. She was focused on the result and did not express any feelings.

She was discharged within a week.

Finally, we obtained the result of the pathological examination. It was a serous adenocarcinoma of the ovary of intermediate histological grade, stage IC by the Fédération Internationale de Gynécologie et d'Obstétrique(FIGO). The postoperative dosage of the serum tumor marker CA-125 dropped to 17 U / ml, indicating the absence of residual disease. However, microscopic examination of the ascitic fluid revealed the presence of malignant cells and Clara would have to undergo chemotherapy. It would consist of a combination of two drugs, administered every three weeks for a total of three cycles. It was a toxic treatment, which in addition to hair loss would require frequent clinical appointments, monitoring renal, cardiac, neurological and immunological functions. The 5-year survival expectation would be 70%.

I already knew the emotional profile of that disrupted family and I continued to adhere to a well-balanced cognitive and affective perspective-taking. During the hospitalization period and also in the first two weeks after Clara was discharged from the hospital, I gradually gave out small doses of information. It seemed ironic to do this, since I was proposing a clearly allopathic intervention after homeopathic doses of information. Consent for Clara's surgery was obtained based on her unconscious desire to get rid of the problem as soon as possible. Chemotherapy would be a more prolonged intervention. I would have to create a longer emotional approach. Although it was a difficult task, the search for family support sounded to me as a good strategy.

Despite using different defense mechanisms, associated with gaps in communication, Clara and her two children had started to support each other emotionally. Using a personalized approach, I gradually reached everyone's acceptance of the need for adjuvant chemotherapy. Mixed feelings of anxiety, anger, insecurity, guilt, bargaining, denial and depression arose. However, there was an unspoken life-saving agreement that supported the relationship of those three people and they asked me to recommend any adjuvant treatment that could lead to a better prognosis.

When Clara attended the first postoperative visit, she was accompanied by her children. I received them together, as I needed to evaluate the interfaces. She was fine and had resumed her professional activities. Although she maintained denial as a predominant defense mechanism, she now had a lighter and more relaxed attitude. She expressed less suffering and had partially broken-down barriers to communication. Clara had given up her usual behavior of assumed invulnerability. She was expressing her feelings more freely. She allowed her children to participate more in her care, receiving better their expressions of interest and support. She had assumed a more human and spontaneous relationship with her children. She started to treat them like adults, already enjoying the result of their behavior change.

The children experienced a late rite of passage, facing the unexpected maternal illness. They responded to suffering with emotional growth. The selfish attitude generally observed in early childhood had changed into an adult behavior that met the mother's needs, expressing consideration and affection.

Ana took a sample of her mother's hair and, using the most recent Clara's picture, ordered a wig that resembled her mother's original hair in color and style. Clara recognized her daughter's sensitivity. Ana knew that Clara would not admit exposing her current situation in the professional or social environment. Luiz had passed a professional qualification test to practice law and Clara was proud of her son's performance.

In medical practice, I had already learned that technical qualification is not the only requirement for obtaining a relationship of trust with the patient. It would only be achieved after an objective demonstration of commitment and professional sensitivity.

Clara completed the three cycles of chemotherapy with 100% dose intensity. Imaging exams showed no signs of residual tumor and I proposed a follow-up program with quarterly clinical reviews.

Two years passed and Clara remained in complete remission. She maintained denial as a defense mechanism, still describing her disease as an ovarian cyst. She never asked me about the prognosis, but strictly followed all my recommendations. Although Clara continued to be a doctor recognized for her rationality, when dealing with her personal health she decided to remain attached to an affective perspective-talking and I followed her choice.

Clara's story confirmed my impression that the patient always signals the best emotional approach. Patients intuitively know their unconscious and their limitations. The success of the interventions has always depended on a fine adjustment between the patient's affective expectations and the physician's sensitivity.