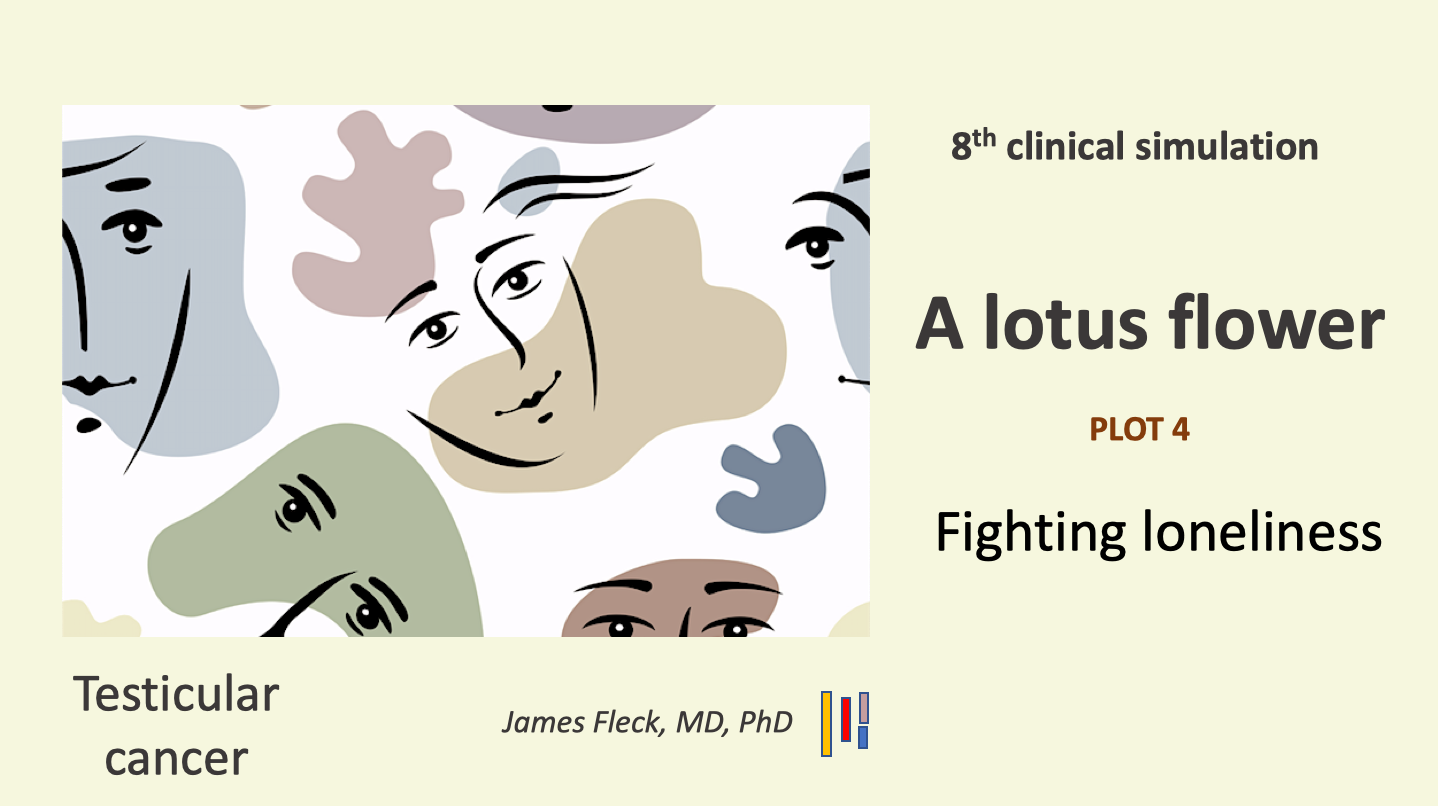 The next day, Mark discussed with me the results of Robert's exams. There was a significant increase in blood levels of beta-HCG and alpha-fetoprotein. These elevated tumor markers pointed to a testicular tumor identified as nonseminomatous.

Previously collected pleural fluid had no tumor cells. We still didn't have a pathological diagnosis. I explained to Mark that the next step would be the surgical removal of the right testicle and we would call the urology team for a consultation. Robert was stable, responding well to antibiotic therapy and in good clinical condition to face the proposed surgical procedure. Within hours, we were contacted by the urology team. The testicle would be removed by an approach similar to an inguinal hernia surgery. They would make an opening in the inguinal canal and the testicle, pulled by the spermatic cord, would be removed intact, in accordance with the international recommendation for this type of cancer surgery. We went to Robert's room to explain the surgical procedure. Mark took the initiative and said the right testicular tumor would have to be removed. He explained that it would provide a pathological diagnosis as well as being an important step in cancer treatment. Mark also commented on the inguinal approach and the need to remove the entire testicle.

Robert listened in silence. His facial expression revealed some surprise and annoyance at the mutilating surgery. He thought for a moment and asked:

How's the other testicle? Will you also remove it?

Robert looked at me, seeking my technical impression.

I nodded my head affirmatively.

Robert said resignedly: Well, I'll have to live with just one nut.

Although he didn't question it, I informed Robert that a prosthesis could be placed at the site of the removed testicle. This would provide a better plastic result, maintaining his perception of bodily integrity. He asked to discuss this later, because at that particular moment, his goal was totally focused on curing cancer. He was relieved by the explanation and agreed to surgery. I informed him that surgery would be scheduled in the next two days.  Previously, he would be examined by a urologist as well as an anesthesiologist.

When Mark and I left the room, we were approached by Eliza, head of the hospital's social services. Eliza reported that she had spoken with Robert and went on to report what she had collected from his previous personal history. Robert did not know his father. He was the son of a single mother who would have migrated from the North of the country, still very young, in search of better job opportunities. He was an only child and lived with his mother until he was twenty. His mother had no family ties. Unfortunately, she was diagnosed with AIDS, which caused great suffering for a period of two years before she died.

Robert felt responsible for his mother's care from a very young age. He started working at sixteen as a newspaper delivery boy, helping with household expenses and later paying for his mother's health care. He studied in the night shift, having completed high school. He had been a great son, as often recognized by the mother.

Since the loss of his mother, Robert has lived alone. He continued working as a courier, transporting goods for various companies. More recently, he joined the university, where he studied Management, always on the night shift. He used to feel free and didn't complain about his lifestyle.

I expressed to Eliza my initial impression that Robert's life had been marked by a great deal of suffering, on which he built his resilience. Eliza agreed and informed that, at Robert's request, she would have contacted some people at some of his working places. She had informed them of Robert's recent hospitalization. She reported that everyone asked about a possible motorcycle accident, but she replied that the problem was not a traffic trauma. She mentioned that Robert was highly esteemed. All professional contacts regretted what happened and made themselves available to assist him in whatever might be necessary.

Eliza was a sensitive lady, intelligent and deeply committed to her work. She shared with me the same concern about the lack of family contacts. She also took the first steps in forwarding social security assistance, as Robert, being self-employed, did not have health insurance in any of the related companies.

Robert faced the surgical procedure without complications. He was on the third postoperative day and doing well when we received the pathological exam of the testicle. As expected, it revealed a mixed tumor with components of choriocarcinoma, embryonic carcinoma and teratocarcinoma. This result combined with elevated tumor markers, especially beta-HCG, increased the risk of brain involvement and we immediately requested a magnetic resonance image of the brain. Fortunately, the exam was normal and we started planning chemotherapy treatment. It would be an aggressive and toxic treatment, but with a high cure rate.

It was my secretary requesting my presence at the reception, as there were two people wanting to talk to me about Robert's situation. I expressed great enthusiasm as we were desperately looking for family contact. I asked if they identified themselves and what degree of relationship they had with Robert. My secretary said they were just friends.

I moved there promptly, while Mark remained in the ward looking after the other patients. I had asked my secretary to accommodate Robert's friends in one of the offices closest to the reception. Upon entering the office, I met a man of about 40 years old, wearing a dark blue suit and a young woman of about 30, also socially dressed. I greeted them both, asked their names and what kind of relationship they had with Robert. The young woman introduced herself as Lisa and the man said his name was Alan. They came to visit Robert separately and occasionally met in Robert's room. Both were clearly surprised and embarrassed by the situation.

Lisa said she was a manager of one of the companies Robert provided services for, and Alan also met Roberto at work, as he was an insurance broker at another company that requested Robert's courier services. Lisa reported starting dating Roberto six months ago and Alan has stated that he was having an intimate and loving relationship with Robert for about two years.

They were unaware of Robert's bisexuality.

Although they still couldn't decide which way to go in the future, they would both support Robert throughout his illness. They chose to stay together and came to talk to me. I told them that Robert was coping very well with all the challenges posed by the illness, both physically and emotionally. I expressed my earlier concern about the lack of contacts. Fortunately, from that moment on, I would have two. I asked them if Robert would have asked for their participation. They informed that, initially, Robert was embarrassed. However, given the sadness of the disease, they started a triangular conversation, where the feeling of solidarity would have prevailed. There was no rupture on either side and Robert said goodbye to them, grateful for their understanding.

Lisa and Alan demonstrated a totally open attitude towards dialogue. It was an unusual situation for me and I didn't quite know how to handle it. However, I felt that this triangulation would have a natural outcome and that I was not there to judge it. I informed them both that Robert was going to need a lot of support as he was about to start chemotherapy. He would have the first cycle in hospital and the following cycles would be administered in the outpatient clinic. I informed that patients should always be accompanied by a family member during chemotherapy sessions. Lisa and Alan made eye contact and reaffirmed their intention to support him. I made myself available for future needs and asked them to enter their phone numbers on Robert's hospital record.