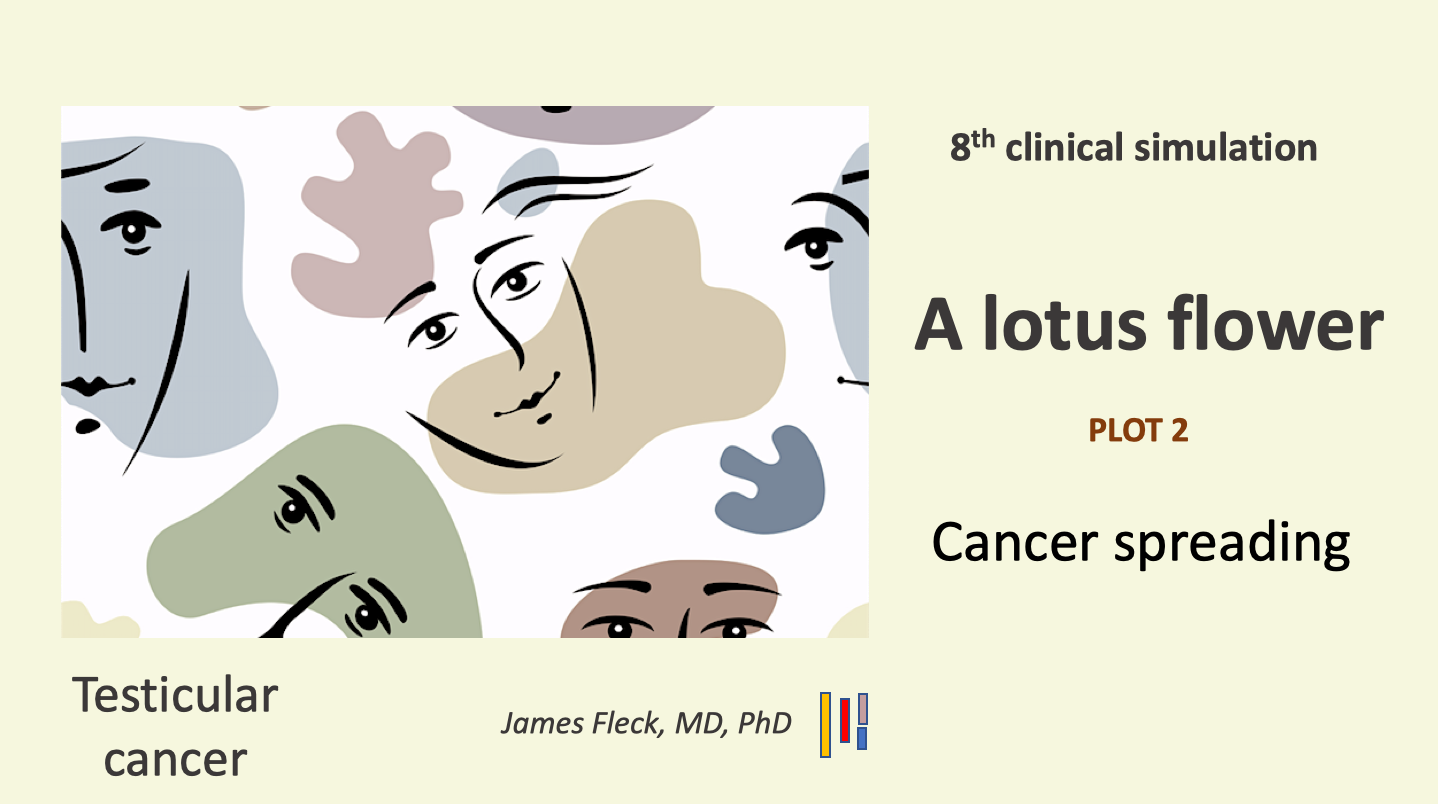 The next day I went to see Robert in the hospital ward. He was feeling better and eating a light meal. It was a cheese sandwich split in half. Robert ate the first half and offered me the other one. I thanked him, surprised and moved by the unexpected attitude of generosity. Robert was a very spontaneous and communicative young man. He thanked the care provided at the emergency room and asked for more information. He was confused, as the initial idea was pneumonia, but everything took on an unpredictable and large proportion. I explained that the pneumonia was probably due to a bronchial obstruction. A tumor was detected in his right testicle, which was possibly responsible for the entire clinical situation. Germ cell tumors metastasize predominantly to lymph nodes and lung. Robert stated that he had previously noticed an increased mass in his right testicle, which he had associated with previous trauma. He used a motorcycle to work and thought he might have inadvertently injured his testicle in a traffic maneuver. I explained that we ordered several tests to better assess a comprehensive diagnosis and that we would soon have a more accurate answer. I took the opportunity to ask him about a family contact with whom we could share his current clinical status.

Robert replied, matter-of-factly: "I don't have a family."

I accepted Robert's answer, tacitly. He had already gone through difficult days, when his life was threatened by an illness whose diagnosis had not yet been fully clarified. He overcame the initial challenge with courage and emotional stability. I was, of course, concerned about the absence of family contact, but I felt this was not the right time to investigate. This problem would naturally return, as we used to offer multidimensional and multidisciplinary care. From the first contact in the emergency room, social service actively sought out his relatives.

I left temporarily and went to evaluate his lab tests. Mark had already checked the result of some blood tests. At that time, the most important was to check his renal function. He was going to have two CT scans, both with radiological contrast. Iodinated contrast is potentially toxic to the kidneys and should be used with caution when renal function is already compromised. Fortunately, his kidneys were fine.

Mark checked the CT scans and called me informing the results. There was enlarged lymph nodes in the retroperitoneum, close to the aorta and renal vessels. It was a cluster of lymph nodes measuring approximately 6 cm in diameter. There was extensive involvement of the mediastinum, a region located between the lungs, caused by fused and enlarged lymph nodes. The left lung was only partially expanded, since there was a pulmonary mass compressing the left upper lobe bronchus, causing obstructive pneumonia. I immediately invited Mark to meet me in Robert's room and inform him of the latest findings.

Shortly, I met Mark at the ward and briefly commented on the previous conversation I have had with Robert. Arriving at the room, we found Robert doing well, without complaints. He was sitting in a chair, reading a sports magazine. I still hadn't had the time to better understand his behavior, but I was impressed by his independent, calm and inclusive attitude.

Robert interrupted his reading and asked us: Hey, doctors! What did you find on my exams?

I explained that a tumor was found in the right testicle, which had already spread to a region located behind the abdominal wall, called the retroperitoneal space. Tumor cells were also found in the mediastinum, an area located between the two lungs. These tumor cells would have migrated upward using lymphatic drainage from the testis. The tumor also spread through the bloodstream to the left lung, where a metastatic mass compressed a bronchus and caused obstructive pneumonia.

Robert asked me: Yesterday you took a lot of fluid from my lung. Where did all the fluid come from?

I explained that the fluid was not inside the lung but within the pleural space. There is usually not much fluid in this space, but in his case,  fluid has accumulated due to obstruction in the lymphatic drainage. The pleural fluid had compressed the lung and caused much of the respiratory and life-threatening distress he had faced the day before.

To be continued in PLOT 3 (conflict) …