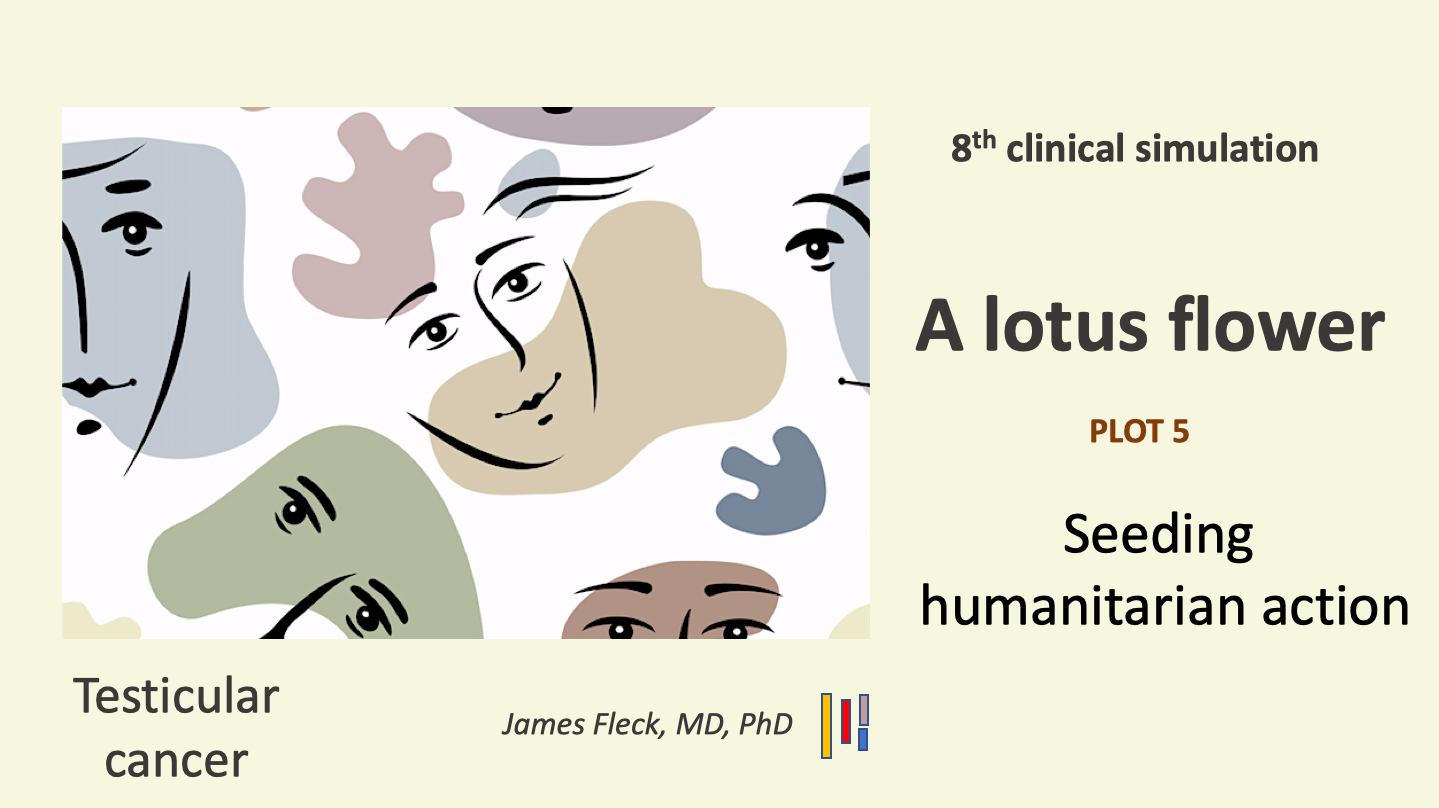 Next day, I met Mark for the daily round. He had already gathered a group of other clinical oncology fellows, internal medicine residents and students. They were waiting for me in the assigned ward. We visit all patients, analyze imaging and laboratory tests, addressing the decision-making of the day.

Momentarily, we arrived as a team at Robert's bedside.

He was calm and communicative as usual. He had no complaints of coughing or shortness of breath. Mark had requested a postoperative chest X-ray which unfortunately showed a partial return of the pleural effusion. We decided to start chemotherapy immediately. I informed Robert that we already had all the necessary data to plan and start his treatment. It would consist of three cycles of chemotherapy with curative intent. Early relapse of the pleural effusion was a sign of tumor aggressiveness and we would have to treat him asap. Robert had used the internet on his cell phone to find out that many young people with similar testicular tumors were cured with chemotherapy and nodded in agreement.

The treatment of testicular tumor is standardized around the world and, despite the advanced disease, he would have a good chance of being cured.

Robert asked about duration of treatment and toxicity.

I replied that it would consist of intravenous drugs combined for five consecutive days. The cycle known by the acronym BEP would be repeated every three weeks for three cycles. He would also receive additional weekly doses of a drug called bleomycin.

I explained that toxicity would be high and would require special attention. It would include the risk of infection and the need for continuous assessment of renal and pulmonary function. I explained that he wouldn't be able to work during this entire period, but that Eliza from social services would help him with the necessary arrangements.

Unexpectedly, Robert asked: How do we know if the tumor is responding to treatment?

Robert was a very smart guy and possibly discovered on the internet that there are some refractory germ cell tumors, which show primary resistance to cisplatin, the most important drug in BEP chemotherapy.

I, promptly assured him that the most important parameters were tumor markers (alpha fetoprotein and beta-HCG). Blood levels were elevated at diagnosis and we would repeat both markers after each cycle of chemotherapy. There are excellent algorithms that describe how much each marker should drop after each chemotherapy cycle, allowing us to better monitor the response. I advised him to strictly follow all recommendations, adhere to treatment, and report any adverse events immediately.

We were leaving the room when Robert asked to speak with me privately.

I suggested to my team that they go ahead. I would join them later.

Robert stared at me and said: Doctor, my mother died of AIDS. As you already know, I'm bisexual and I'm afraid of having AIDS, too. Is my tumor related to HIV?

I replied that testicular tumor is not an HIV-related tumor, but because of his lifestyle I would recommend taking HIV-test, even because he would receive an immunosuppressive treatment.

Robert agreed and I requested the exam.

Twelve days passed. Roberto had already completed the first week of chemotherapy and was discharged uneventfully. Fortunately, he tested negative for HIV. He would continue his treatment at the outpatient clinic.

After the first day at home, he developed febrile neutropenia. His white blood cell count dropped sharply, showing less than 100 neutrophils, and his temperature reached 100.4°F. He was admitted to the emergency room and after three blood cultures started with empirical antibiotic therapy. This complication is not uncommon after BEP chemotherapy. Fortunately, neutropenia wouldn't last longer than three or four days. As Robert was still young, he had no comorbidities and was receiving broad-spectrum antibiotic therapy, he would overcome the infection in a few days.

Four days passed and Robert's blood counts returned to normal, the fever broke, and he would be released from the hospital. When I visited him just before he was discharged, he was accompanied by Alan. They chatted, relaxed. Alan mentioned that he would take Robert to his own home. It was a comfortable home, and there he would best assist Robert. Robert expressed his gratitude to Alan. The house belonged to Alan's mother, a 67-year-old woman who suffered a stroke two years ago and was left with some sequelae. She was confined to a wheelchair and Alan had already organized home care for his mother's assistance. Robert would share that technical support. Both asked me about further infectious complication. They wanted to know if this would always happen after every cycle of chemotherapy.

I assured them that Robert should receive filgrastim. The drug would be administered subcutaneously every day for up to two weeks.

Filgrastim decreases the risk of neutropenia and hospitalization. It acts on the bone marrow, stimulating the white cells, mobilizing leukocytes into the bloodstream and improving protection against infections.

Robert cleared expressed treatment adherence. He was very moved by the care provided by the hospital staff. He was sure he would be cured. Alan also commented that he was very impressed with the public health care. He said that despite being free of charge, the service was comprehensive, providing qualified service with a problem-solving methodology. The ward was clean, combining continuous central nursing supervision with partial patient privacy, provided by retractable curtains. The bathrooms, despite being in common use, were comfortable, sanitized and plentiful with hot water. He highly praised the work of nurses and doctors. Everyone was very helpful, providing technical efficiency and empathy.

Alan expressed a very keen humanitarian and administrative vision. He mentioned that society needs a more tertiary care centers. When he accompanied Robert to the hospital, he could witness the overcrowding of the emergency room. There were lines of ambulances bringing patients from other counties. Working space was overload . He sincerely was moved to help as a volunteer in NGOs, aiming to extend a quality health assistance to all those in need.

I thanked for Alan’s helpful comments. I was also touched by the home care he would provide for Robert, since we would still have a long way to go.

That morning, during the daily round, Mark reported the results of beta-HCG and alpha-fetoprotein markers. The values ​​had dropped significantly. Mark showed an algorithm in his cell phone. Robert's tumor markers decreasing values were superimposed into expected plotted curve.

We both celebrated, as we were on the right path.

Robert's chemotherapy proceeded without further complications. By the end of the treatment, beta-HCG and alpha-fetoprotein blood tumor markers returned to the normal range. A CT scan of the chest and abdomen revealed complete remission of the disease, except for a residual mass measuring about three centimeters observed in the mediastinum.

Robert was fine, had no symptoms and had resumed his professional activities, as well as his evening management graduate course. He stayed at Alan's house and they had assumed a stable relationship.

Robert was on his way to the university hospital for a schedule follow-up at the outpatient clinic, when Mark questioned me about how to handle the residual mediastinal mass.

I explained that it would have to be surgically removed.

Although the markers were normal, pathological examination of the removed testicle revealed mixed components, including teratocarcinoma. Robert would likely have a residual mature teratoma in the mediastinum. This tumor, although not malignant, tends to grow over the years and compress vital structures. I suggested Mark to send Robert for a chest surgery appointment.

Mark made immediate contact and obtained an appointment for the next week and we informed Robert of the surgery, explaining its rationality in detail. We had already learned to deal with Robert and could predict his reactions. As expected, Robert had asked several questions. He asked if after this intervention he would have to undergo further treatment and we both replied that the surgery would be enough, as the remaining tumor was not malignant. Robert was annoyed at having to interrupt his activities again, but after a while he agreed with the recommendation.

Robert looked at us smiling and said in a smart and ironic way: Let's open this new pack.

Robert's case would be discussed in our weekly meeting with thoracic surgery. He was young, had no comorbidities, responded favorably to chemotherapy, and there was no longer any evidence of malignancy. Robert took several lung function tests. All were normal and surgery was scheduled.

When we left the interdisciplinary meeting, I alerted Mark that we should contact the anesthesiologist. Robert had used a drug called bleomycin as part of his chemotherapy treatment, which, although he had received a safe cumulative dose, special care should be taken regarding intraoperative oxygenation. Mark was already aware of this and hurried to alert the anesthesiologist.

The surgery was uneventful. The residual mediastinal lesion was completely removed and the pathologic exam confirmed our clinical impression of mature teratoma.

Robert had successfully completed all steps of his treatment and reported feeling strengthened. I had already anticipated this reaction, as he was a very resilient guy, clear manifested in all the challenges he had faced before.

Robert had strictly complied with all follow-up recommendations and was cured. He majored in administration. He maintained a stable relationship with Alan and jointly started an outsourcing company. They were very creative and sought a profitable market opportunity. They had selected several activities related to human resources and logistics that were necessary in large companies, but that did not justify hiring a dedicated employee. They were so successful in the venture that were already opening branches in several states in southern Brazil. The idea had received marketing and creativity awards.

They developed a social program to help families of mothers with AIDS.